Kat's Story Part 1: "This is the coldest house I’ve ever lived in."

Sitting with me in front of two electric heaters, Kat tells me, "I’m cold all the time."

Kat lives in a two-bedroom unit in Canberra’s inner north. It looks like it hasn’t changed at all since it was built. The carpets, featuring a tired mustard paisley, are the first sign the house hasn’t been improved in a while.

Even with both heaters on, I can feel a chill moving through her home. Kat often hears the conversations of people walking down her street because the windows are so draughty.

Kat has been living here for three months now. She recently moved from Europe to Canberra at short notice, due to a family crisis. Her parents were looking after her three cats while she was overseas, but when she returned she had to take them back in. Kat quickly needed to find a place for the four of them to live.

As we speak, Thundercat curls up on her lap for warmth. 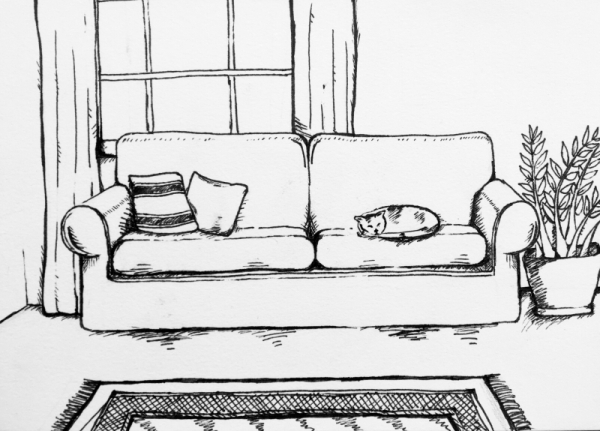 People who rent, like Kat, don't have many choices available. She asks herself if she would have reconsidered her decision to live in this house, if she had known how cold it would be. "Maybe, maybe I would've tried to negotiate – but in Canberra, the rental market is so tight, I don't know what I could've done." Like many other renters, she had to take what she could get.

So she now lives in a home which can only be described as a "tent": "There's no insulation… so it loses warmth in about ten seconds." When the wind picks up, there are "so many gaps you can feel it and hear it." The old, wooden windows have shrunk so they no longer shut properly. Through the gaps, I can see grass growing outside the window.

"This is the coldest house I've ever lived in."

Kat moved from a country with strong protections for renters, like minimum energy efficiency standards for rental homes. Even though she's lived in plenty of cold places – places where the average temperature can be below zero in winter – most of her past homes have been much warmer. We don't have these kinds of living standards for rental properties in Australia - yet. Kat can really tell the difference.

Read Kat's Story Part 2: "I'm almost in pain from the cold all the time."

Kat shared her story with Anna as part of "Home Truths".