The Rub on Unfair Evictions

“Unfair evictions” are in the crosshairs all over Australia. The Victorian government has restricted them. NSW Labor has committed to banning them. In SA, ACT, and Queensland, there are moves to end the practice.

With this going on, it’s worth taking the time to understand what “unfair evictions” are and the other ways in which a tenancy can end. Lo and behold, this handy flowchart: your basic guide to how leases end in Australia. 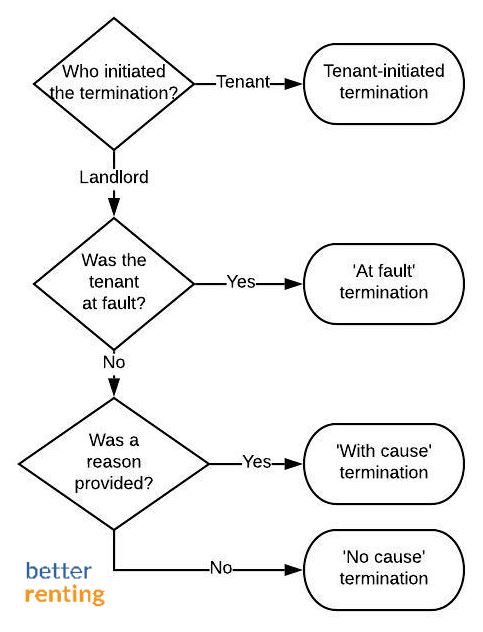 Firstly, a word on terminology. "Termination", in this flowchart, describes the ending of a lease agreement. This often comes after some sort of notice is given. When a landlord gives notice, it is a "notice to vacate", or NTV. Strictly speaking, landlords cannot "evict" tenants. Rather, if tenants don’t comply with a NTV then the landlord can ask for the state to evict the tenants. However, this article uses "eviction" for the sake of simplicity and to avoid euphemism.

With that in mind, this flowchart shows four types of terminations: tenant-initiated, 'at fault' terminations, 'with cause', and 'no cause' terminations.

The first type is the tenant-initiated termination, such as when tenants can give 3 weeks' notice during a periodic tenancy. In an ideal world, this is the only sort of termination that would ever happen: renters would never have to leave their home unless they wanted to. These terminations happen because people’s circumstances change: a renter might need to move interstate, or want to move closer to a place of work, or the school of their children.[1] It’s important to understand that while these terminations are initiated by the tenant, they aren't always strictly voluntary: this type also includes what are sometimes called "forced moves". This is when tenants initiate the move, but they would prefer to stay. This might happen because the property is poorly maintained, too cold in winter, or unaffordable.[2]

The next three types are all landlord-initiated. The first of these is the "at fault" termination, where a landlord issues a notice to vacate because of something the tenant has done (or failed to do). Maybe the tenant is in rental arrears, or they’ve breached their tenancy agreement in some other way.[3] It’s clearly not ideal for things to come to this point, but it’s defensible that a landlord has recourse if their tenant has violated the lease, or if the rent isn't being paid.[4]

Then we have the "no fault" terminations, beginning with "with cause" terminations. In these cases the tenant is not at fault, but the landlord has another reason for wanting the tenancy to end. These reasons would be prescribed in legislation to cover the possible scenarios in which this might happen. For example, prescribed grounds could include sale of the property, major renovations, or the desire to have a family member occupy the property. These terminations are more defensible than terminations without cause, but they can still be incredibly disruptive and expensive for people who rent. In addition, this type of termination can be abused by unethical landlords, who establish fraudulent grounds in order to evict a tenant, such as falsely claiming an intention to renovate (“renoviction”).[5]

And now we come to no-fault, no-cause terminations: "unfair evictions". These evictions are indefensible. This is when the landlord acts to terminate the tenancy, without being required to give any reason.

However, of course, there is always a reason. Given that all the fair reasons to end a termination can be covered [6], unfair evictions allow landlords to terminate a tenancy when there isn't a fair reason. The unfair reason is typically retaliation against tenants who make too much noise about requesting maintenance or exercising their other rights. In some cases the landlord might want to get a higher rent for the property, and maybe this seems simpler to them than increasing the rent for the current tenants. In effect, unfair evictions allow landlords to avoid being held accountable to the law.

Unfair evictions are not rare. According to Disrupted, about one in ten renters has experienced an unfair eviction. But more importantly, all renters face the threat of an unfair eviction. As Gaventa observed, "it is not the actual exercise of coercion but the constant possibility that it might be exercised that supports the routines of non-challenge." Whether it happens or not, the risk is there, and this forces renters to restrict their self-advocacy. It makes it harder for them to exercise their rights.

A useful analogy is unfair dismissal law. In Australia, there are valid reasons for an employer to end someone’s employment. But there are restrictions around these. It is illegal, for example, to terminate someone’s employment because they joined their union. Unfair dismissal laws reflect, firstly, that there is a power imbalance between employers and employees and, secondly, that losing your job is a big deal, and shouldn’t happen lightly. Given the power imbalance between renters and landlords, and the fact that shelter is a basic human necessity, it’s remarkable that unfair evictions are still allowed.

The solution to this is simple. All it requires is:

That’s it. A simple, sensible reform. Fair landlords wouldn’t be affected. People who rent would benefit from greater stability and be able to exercise their rights with greater security. Australia’s growing population of renters would be an important step closer to having the homes the deserve.

[1] For this reason, long-term fixed leases are also problematic. People's circumstances can change! Not to mention, tenants may find that a dwelling or a landlord doesn't suit their needs, and they shouldn't be locked in for five years in such a situation. See Chris Martin, 2018, "Improving Housing Security through Tenancy Law Reform: Alternatives to Long Fixed Term Agreements" for discussion.

[3] Note that rental arrears is not automatically grounds to terminate a lease: the tenant must be issued a notice to remedy and be given a chance to remedy the breach.

[4] That said, it's possible to imagine restrictions on "with cause" terminations. For example, France doesn't allow evictions during the winter months.

[5] In some causes a landlord may use a "with cause" termination in a genuine sense, but also retaliatory. For example, a landlord may be frustrated if a rent increase is successfully opposed and decide to sell the property. This isn't fraudulent, but is arguably still retaliatory, and is certainly still disruptive for the tenant.